GMAT Score Percentiles – What Percentile Should You Aim For? 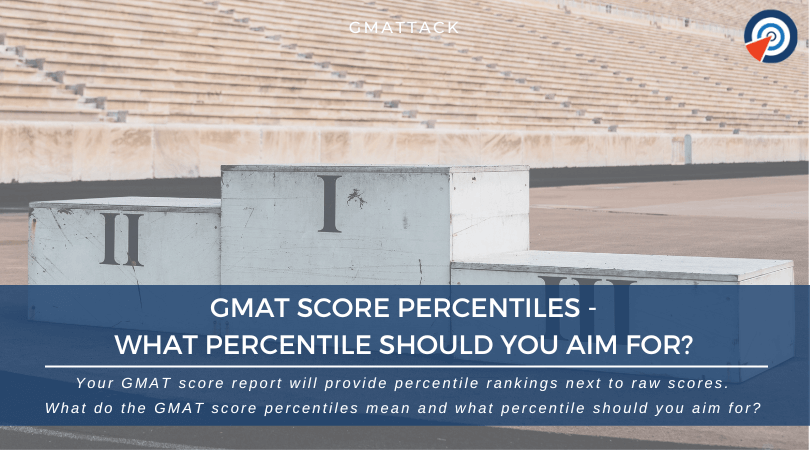 Your percentiles may have changed after you originally received your score report if you took the GMAT some time ago. Percentiles may vary over time because they are updated yearly. As mean GMAT scores have grown, GMAT score percentiles have generally moved downward.

Read on to learn more about GMAT score percentiles and what percentile you should aim for when taking the GMAT.

The latest information on the overall GMAT score and percentile rankings is provided in the table below. A total GMAT score of 730, for instance, represents the 95th percentile. In other words, you did better than 95% of GMAT test takers, which is good. However, your score would be far less competitive if it had a percentile rating below 60%, and 40% of candidates had a higher score than you did.

You may see where you stand by using this comparison rating; a percentile ranking of 99 makes your score extremely competitive because just 1% of candidates have a score higher than yours. A percentile score of 90% or more is preferred when applying to the best business schools.

The verbal and quantitative sections’ scaled scores are from 0–60. Candidates do, however, typically obtain scores between 6 and 51. The scaled scores for the Quantitative and Verbal parts are displayed in the tables below, along with their percentile rankings.

The Quantitative section of the GMAT is graded using a scale that ranges from 0 to 60 points. Take a look at the following table for the GMAT Quantitative Score Percentiles to get a feel of how your results compare. This graph shows your scaled sectional score in Quant and its percentile rather than your raw GMAT score and percentiles.

Despite the fact that your results on the AWA and IR sections do not contribute to your overall score, which ranges from 200 to 800, nevertheless, business schools will evaluate your performance anyway. Scores for GMAT essays range from 0 to 6, with each half-point representing one point. Yes, a half-point may, and frequently does, have a considerable influence on your writing percentile on the GMAT.

You shouldn’t be astonished to discover that the Integrated Reasoning (IR) component of the GMAT has its own scoring system; its grade ranges from 1 to 8. In contrast to the AWA, IR scores are given in full points rather than in half-point increments. This has a major impact on IR percentiles.

Here is how the GMAT score versus percentiles for IR looks.

As an increasing number of people get excellent GMAT scores, particularly on the math section, it is harder to get a high percentile. According to The Wall Street Journal, math percentile rankings have grown increasingly competitive as more and more overseas students are taking the GMAT. When students from countries with strong math capabilities, such as China and India, make up a larger number of test-takers, it becomes harder to achieve the top percentile.

On the other hand, it’s still uncommon for test takers to achieve high grades in the difficult Verbal portion. You will still score in the 99th percentile if your verbal section score is 45 or above from 60. Do the same in Quant and you’ll only be in the 59th percentile.

Business schools are aware of the cyclical nature of GMAT score percentiles. Although they don’t have a set threshold, they do take your GMAT percentiles into account when assessing your application.

As usual, the admissions process is thorough and not only GMAT-focused. But the greater the competition is, the better your percentile score. If you show up with a percentile score of 100, you were the test taker with the highest score, and just 1% of students scored higher than you if you were in the 99th percentile. With such scores, it is quite unlikely to be rejected of course.

If you lie in the 50th or 60th percentile, in contrast, your scores are not as competitive. Additionally, if your GMAT score is really low—below the 50th percentile—you may need to retake the test and, unfortunately, pay the GMAT exam fee a second time.

Understand that certain institutions may have minimum Quant sectional scores. It is also often claimed that the two portions should have a “balanced score.”

To predict the GMAT score you’ll need to get into a prestigious college, it is helpful to look at average GMAT scores for the best programs. If you go through this list, you’ll see that they all tend to score better than 700, sometimes even far higher, like Columbia did (average score of 732!).

Utilizing the tables above, convert this to percentiles. A score of 732 would be close to the 96th percentile on the GMAT, whereas a 700 would be in the 88th percentile. Clearly, getting into an elite business school requires you to outperform most of your peers.

Although it may not always be needed, having a rating in the top 10 percent of GMAT candidates (placing yourself in the 90th percentile or higher) is unquestionably helpful if you’re applying to a top-10 university.

Imagine, for instance, a candidate who completed their software engineering education in China and went on to work as a programmer for the subsequent six years on back-end software systems. During this time, they had no interactions with customers or business partners. Imagine for a moment that Mandarin is the major language spoken at the place of employment. It’s possible that he is phenomenal at what he does and has a bright future in the field of software engineering. A perfect score of 51 on the GMAT’s Quantitative portion may well be possible for such a candidate. As a result of the fact that English is only his second language, he receives a lower score on the Verbal section—perhaps 32 out of 51.

In spite of this, aspirants such as this one choose to take the GMAT nevertheless in the hopes of receiving an admission letter from one of the top MBA programs. No matter how well they perform on the GMAT, if they do not meet these other requirements, the odds will always be stacked against them.

There are thousands of people that sign up to take the GMAT and meet this kind of description. Because of the thousands of scores of 50 or 51 in the Quantitative section and 30 to 35 in the Verbal section, the GMAT score percentiles are massively distorted. As a result, many applicants may have the impression that they score very well on the Verbal section but very poorly on the Quantitative section.

In other words, getting into a high Quant percentile is much more difficult than obtaining a high Verbal percentile. But do not worry! Your GMAT percentile scores are only a different way of expressing your result. Business schools are primarily interested in your total (not percentile) score and the section subscores.

The majority of colleges make their average GMAT acceptance rates public. These details are available on each school’s website. If you can’t find it, you may contact the admissions office by phone or email directly for further information.

After exploring business schools, spend some time getting acquainted with the GMAT, including its format and scoring. Create a customized study scheme that will assist you in achieving your desired score and demonstrating to admissions committees that you are a good candidate.

Percentiles are helpful for MBA programs since they let universities know how you scored on the GMAT in comparison to other applicants. However, the percentile scores should not be your main attention. Instead, focus on getting a good GMAT score, and of course ideally great scores on both the Quant and Verbal sections. These will be the main point of attention for the business schools you’re applying to, too. In addition, your scores do not change over time, while the corresponding percentiles do if you compare scores from previous years to those from the current year.

GMAT to GRE Conversion – Can You Compare the Results?

GMAT Study Books – 10 Best Books to Study for the GMAT

GMAT vs GRE – Which Test is Right for You? Differences between GMAT and GRE

How Are GMAT Scores Calculated? Review of the GMAT Scoring System

Is the GMAT or GRE easier? Comparing the Difficulty of GMAT and GRE

What GMAT Score do I need? How to Determine Your GMAT Target Score

GMAT Study Books – 10 Best Books to Study for the GMAT

What is a good GMAT score? Find the GMAT Score you need

GMAT Difficulty – How Difficult Is The GMAT Really?

GMAT to GRE Conversion – Can You Compare the Results?