What GMAT Score do I need? How to Determine Your GMAT Target Score 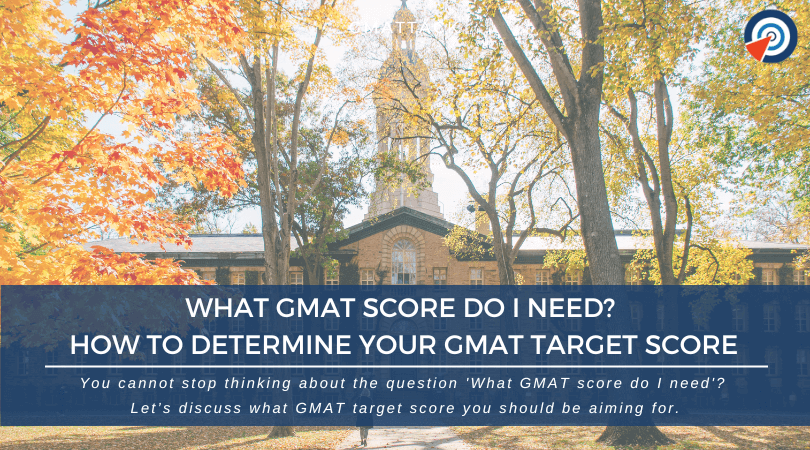 When preparing for your GMAT exam, it can sometimes feel impossible to focus on anything other than wondering what your final score will be and how that will influence your chance at securing the future you’ve always imagined for yourself. ‘What GMAT score do I need’ may be a question you cannot stop thinking about. It can feel as though a lower than expected score can spell the end of your future. Luckily, it’s not as simple as that, and there’s really no need to be terrified by your GMAT result. Of course, you should still study and try to earn the highest score you possibly can, but if you don’t score a number that’s in the stratosphere, it’s not the end of the world. The critical thing to remember is that you’re not in high school anymore. There’s no one to compete with, no ‘valedictorian’ position up for grabs. The only person who’s there to judge you is yourself. So relax, and let’s discuss what the various score results could really mean for your future.

If you’ve spent any time searching GMAT scores over the internet, you’ll have seen lots of blogs and videos posted by people bragging about their 750+ GMAT scores. The internet has no shortage of braggers and teasers. However, scoring this high is immensely difficult and not required to get into business school. The only important question regarding high scores is which school you’re aiming to get into. Are you compelled to get into a famous business school? Do you have your heart set on the Ivy League? Will any reputable university be sufficient? Or does it need to be internationally acclaimed?

If you have set your eyes on an elite Ivy League university, the answer to the question ‘What GMAT score do I need’ may indeed be 750 and upwards. But many other factors may play a role in setting your GMAT target score, so even a lower score may still be a good GMAT score and certainly not be the end of the world.

Despite the countless studies that have looked into the value of high-end famous schools and their influence in securing high-paying jobs, there is still no evidence that suggests that these schools will make a substantial difference to future employers[1]. This data is crucial because of how expensive it is to go to a school that’s in the Ivy League or is internationally famous. These schools cost 10x what a public institution charges, entirely because of their reputation. These schools expect students to provide scores that are at least 710, ideally higher.

Despite the crippling prices, enrollment demand is sky-high, so they expect to be dazzled by your score. Depending on the year you apply, a GMAT target score of 710 may not be a high enough score if other students have scored especially high and the applicant average has raised. So if your heart is set on the Ivy League, you’ll need to be concerned about ensuring your score is at least 710, but ideally 730 or higher.

If your heart isn’t set on an internationally acclaimed or Ivy League school, you may instead be shooting for something that’s decent and reputable. In that case, you have much more leeway with your score. Ideally, you would still get a score of at least 700 when applying to these universities; with this score, you shouldn’t be too worried about being accepted. However, a score that’s as low as 680 may still be enough to secure your place[2].

These schools have more spots available and won’t read your score with the same level of scrutiny as those in the Ivy League. If your score is too low, however, such as 650 or below, you’ll need to prove yourself with either your quantitative scaled score or your verbal scaled score.

You may notice that both the quantitative and verbal scores are ‘scaled.’ What this means is that you’ll not be scored simply on how well you did in answering the questions and writing your essay. Instead, you’ll be scored based on how you compared to the other students who took the test over the last three years. This has a massive impact on the GMAT score you need and how you can get there.

You’ll notice that there’s a difference in the way each section is weighed. For example, you only need to score within the top 50th percentile to be awarded a score of 43 on the quantitative section. However, you need to be within the top 94th percentile for the same score of 43 on the verbal section. This should demonstrate that the verbal section of the exam has an enormous weight in calculating your final overall score[3].

This isn’t great news for those out there who are great at math and not so fond of writing. Reason would dictate that the reason these percentages are so skewed is because students generally score higher on the verbal section than they do on the math section. Naturally, this pulls down the average percentages on the math side and makes it easier for some to stand out. But, don’t allow the verbal section of your exam to suffer simply because other people are doing well and influencing your score. If you’re great at math, ensure you’re allocating more study time to the verbal section to ensure that it doesn’t let you down on exam day.

So, what GMAT score do I need? Remember these key points in determining your target score:

With the exception of studying hard and preparing long enough for your GMAT, as well as receiving expert tuition, there’s not much else you can do to influence the result of your GMAT exam. Your result is relative to how others scored, which is important to know when strategizing your study method. Ensure that If you’re great at either math or critical writing, you’re allowing enough time to study more for the section that you’re weaker at. With a well-balanced study plan and a realistic idea of the types of universities you’ll apply to (famous or not), then your future will be bright no matter the result.

[1] Schnitzer, Kyle. Data Shows that Going to an Ivy League School is No Longer a Requirement for Fortune 100 CEOs. Ladders. 2019. https://www.theladders.com/career-advice/new-data-shows-that-going-to-an-ivy-league-school-is-no-longer-a-requirement-for-fortune-100-ceos

[2] Milliman, Hayley. GMAT Requirements: What Score Do You Need for an MBA? Prep Scholar. 2017. https://www.prepscholar.com/gmat/blog/gmat-requirements-for-mba/

Is a Calculator Allowed On the GMAT? Tips to Improve Your GMAT Calculation Skills

Where to Take the GMAT? Find the Right GMAT Test Center for Your GMAT

GMAT vs GRE – Which Test is Right for You? Differences between GMAT and GRE

Is the GMAT or GRE easier? Comparing the Difficulty of GMAT and GRE

What is a good GMAT score? Find the GMAT Score you need

How Are GMAT Scores Calculated? Review of the GMAT Scoring System

GMAT Difficulty – How Difficult Is The GMAT Really?